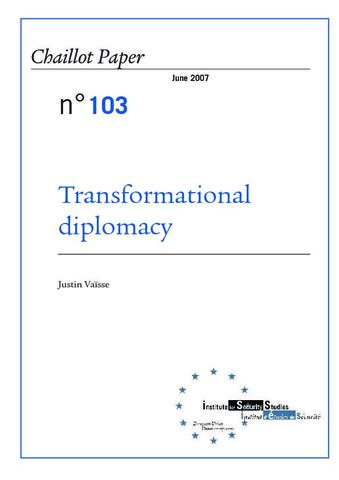 The attacks of September 11 2001 spectacularly demonstrated that America’s main security challenges did not stem from traditional power rivalries but rather from ‘grey areas’, failed or badly governed states which are breeding grounds for extremism. Today the emphasis has shifted from focusing on relations between states to acting directly on states themselves, so as to preempt the growth of terrorism, arms proliferation, genocide, civil wars etc. After the concept of the ‘global war on terror’, President George W. Bush put forward his ‘freedom agenda’ aiming to promote democracy as a response to the security challenges facing the world, in particular in the Middle East. But overthrowing tyrants and holding elections is not enough to create a stable and well-governed democracy and can even, in some cases, complicate matters, as events between 2003 and 2005 in Iraq, Afghanistan, the Palestinian Authority and Egypt have shown. This is where ‘transformational diplomacy’, the concept inaugurated by Condoleezza Rice in early 2006, comes in. Basically this consists in working with the partners of the United States with a view to ‘build and sustain democratic, well-governed states that will respond to the needs of their people and conduct themselves responsibly in the international system.’ To enable this to happen, it is first of all American diplomacy which must transform itself, so as to become less ‘analytical’ and more operational, characterised by direct involvement in foreign societies rather than just being restricted to the realm of foreign policy. This Chaillot Paper explores the scope and limits of this ‘transformative’ action: is the realist paradigm, that of interpower rivalries, really no longer relevant? Can diplomats transform themselves into active promoters of good governance? Are other countries ready to accept them in this role, or will they accuse them of interference? Can transformational diplomacy really change the world?

Iraq, Katrina and US Foreign Policy: Implications for the EU