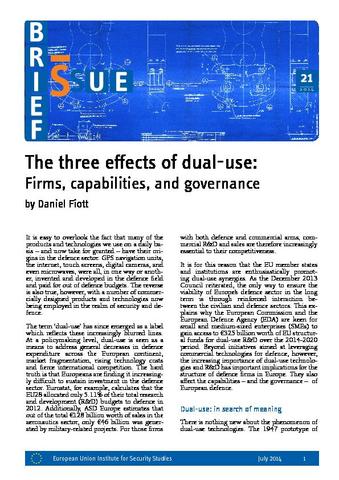 It is easy to overlook the fact that many of the products and technologies we use on a daily basis – and now take for granted – have their origins in the defence sector. GPS navigation units, the internet, touch screens, digital cameras, and even microwaves, were all, in one way or another, invented and developed in the defence field and paid for out of defence budgets. The reverse is also true, however, with a number of commercially designed products and technologies now being employed in the realm of security and defence. The term ‘dual-use’ has since emerged as a label which reflects these increasingly blurred lines. At a policymaking level, dual-use is seen as a means to address general decreases in defence expenditure across the European continent, market fragmentation, rising technology costs and fierce international competition. The hard truth is that Europeans are finding it increasingly difficult to sustain investment in the defence sector. Eurostat, for example, calculates that the EU28 allocated only 5.11% of their total research and development (R&D) budgets to defence in 2012. Additionally, ASD Europe estimates that out of the total €128 billion worth of sales in the aeronautics sector, only €46 billion was generated by military-related projects. For those firms with both defence and commercial arms, commercial R&D and sales are therefore increasingly essential to their competitiveness.