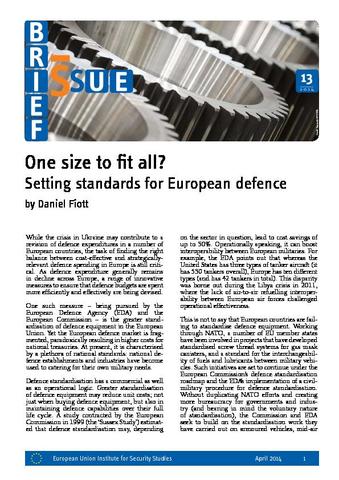 While the crisis in Ukraine may contribute to a revision of defence expenditures in a number of European countries, the task of finding the right balance between cost-effective and strategically-relevant defence spending in Europe is still critical. As defence expenditure generally remains in decline across Europe, a range of innovative measures to ensure that defence budgets are spent more efficiently and effectively are being devised. One such measure – being pursued by the European Defence Agency (EDA) and the European Commission – is the greater standardisation of defence equipment in the European Union. Yet the European defence market is fragmented, paradoxically resulting in higher costs for national treasuries. At present, it is characterised by a plethora of national standards: national defence establishments and industries have become used to catering for their own military needs.