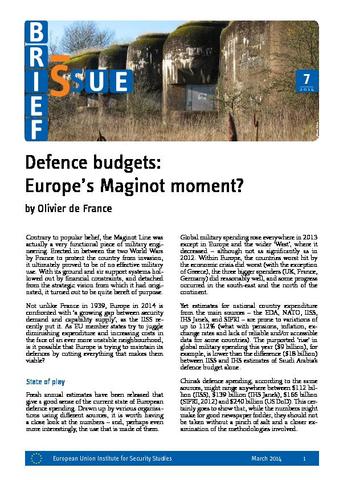 Contrary to popular belief, the Maginot Line was actually a very functional piece of military engineering. Erected in between the two World Wars by France to protect the country from invasion, it ultimately proved to be of no effective military use. With its ground and air support systems hollowed out by financial constraints, and detached from the strategic vision from which it had originated, it turned out to be quite bereft of purpose. Not unlike France in 1939, Europe in 2014 is confronted with ‘a growing gap between security demand and capability supply’, as the IISS recently put it. As EU member states try to juggle diminishing expenditure and increasing costs in the face of an ever more unstable neighbourhood, is it possible that Europe is trying to maintain its defences by cutting everything that makes them viable?