Terrorist attacks in Niger: not another Mali 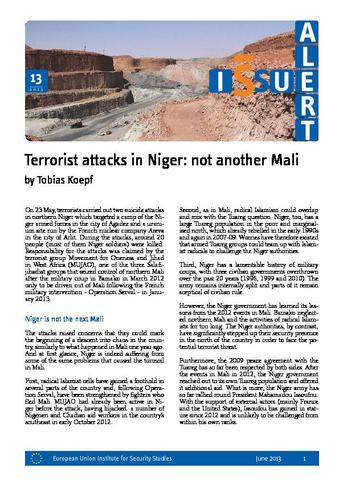 On 23 May, terrorists carried out two suicide attacks in northern Niger which targeted a camp of the Niger armed forces in the city of Agadez and a uranium site run by the French nuclear company Areva in the city of Arlit. During the attacks, around 20 people (most of them Niger soldiers) were killed. Responsibility for the attacks was claimed by the terrorist group Movement for Oneness and Jihad in West Africa (MUJAO), one of the three Salafi-jihadist groups that seized control of northern Mali after the military coup in Bamako in March 2012 only to be driven out of Mali following the French military intervention - Operation Serval - in January 2013. The attacks raised concerns that they could mark the beginning of a descent into chaos in the country, similarly to what happened in Mali one year ago. And at first glance, Niger is indeed suffering from some of the same problems that caused the turmoil in Mali.