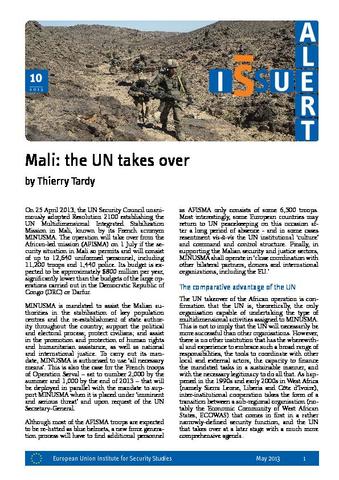 On 25 April 2013, the UN Security Council unanimously adopted Resolution 2100 establishing the UN Multidimensional Integrated Stabilization Mission in Mali, known by its French acronym MINUSMA. The operation will take over from the African-led mission (AFISMA) on 1 July if the security situation in Mali so permits and will consist of up to 12,640 uniformed personnel, including 11,200 troops and 1,440 police. MINUSMA is mandated to assist the Malian authorities in the stabilisation of key population centres and the re-establishment of state authority throughout the country; support the political and electoral process; protect civilians; and assist in the promotion and protection of human rights and humanitarian assistance, as well as national and international justice. To carry out its mandate, MINUSMA is authorised to use ‘all necessary means’. This is also the case for the French troops of Operation Serval that will be deployed in parallel with the mandate to support MINUSMA when it is placed under ‘imminent and serious threat’ and upon request of the UN Secretary-General.

EU engagement in the Sahel: lessons from Somalia and AfPak