Tackling the challenges of SSR 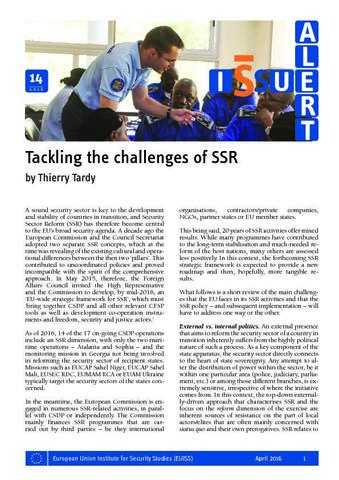 A sound security sector is key to the development and stability of countries in transition, and Security Sector Reform (SSR) has therefore become central to the EU’s broad security agenda. A decade ago the European Commission and the Council Secretariat adopted two separate SSR concepts, which at the time was revealing of the existing cultural and operational differences between the then two ‘pillars’. This contributed to uncoordinated policies and proved incompatible with the spirit of the comprehensive approach. In May 2015, therefore, the Foreign Affairs Council invited the High Representative and the Commission to develop, by mid-2016, an ‘EU-wide strategic framework for SSR’, which must ‘bring together CSDP and all other relevant CFSP tools as well as development co-operation instruments and freedom, security and justice actors.’ As of 2016, 14 of the 17 on-going CSDP operations include an SSR dimension, with only the two maritime operations – Atalanta and Sophia – and the monitoring mission in Georgia not being involved in reforming the security sector of recipient states. Missions such as EUCAP Sahel Niger, EUCAP Sahel Mali, EUSEC RDC, EUMAM RCA or EUAM Ukraine typically target the security sectors of the states concerned.