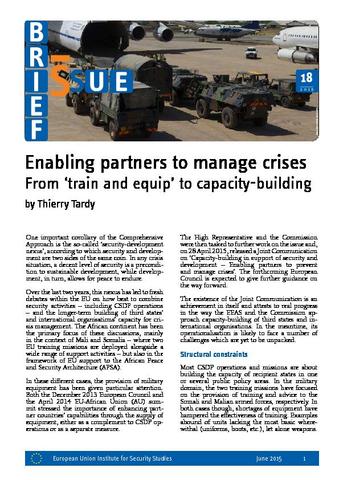 One important corollary of the Comprehensive Approach is the so-called ‘security-development nexus’, according to which security and development are two sides of the same coin. In any crisis situation, a decent level of security is a precondition to sustainable development, while development, in turn, allows for peace to endure. Over the last two years, this nexus has led to fresh debates within the EU on how best to combine security activities – including CSDP operations – and the longer-term building of third states’ and international organisations’ capacity for crisis management. The African continent has been the primary focus of these discussions, mainly in the context of Mali and Somalia – where two EU training missions are deployed alongside a wide range of support activities – but also in the framework of EU support to the African Peace and Security Architecture (APSA).