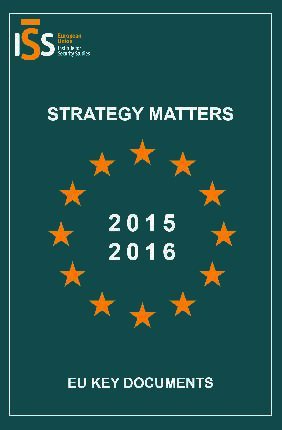 Two years ago the EUISS published a small compendium of key EU documents entitled ‘Strategy Matters 2003-2014’. The rationale was to provide a compilation of relevant texts to which experts and practitioners could refer before the expected launch of the ‘strategic reflection’ triggered by the mandate given to the HR/VP by the December 2013 European Council, and subsequently carried out by Federica Mogherini after her appointment in late 2014. Since then an intensive series of discussions and consultations have taken place, leading to the elaboration and release of two major documents. The first was published in June 2015 and titled ‘The European Union in a Changing Global Environment: A More Connected, Contested and Complex World’. The second, ‘A Global Strategy for the European Union’s Foreign and Security Policy’, published under the title ‘Shared Vision, Common Action: a Stronger Europe’, was unveiled a year later, at the European Council meeting of 28/29 June. The aim of this new compendium is to complement the information offered two years ago, to help disseminate the analysis underpinning the strategy as well as the recommendations stemming from the EU Global Strategy (EUGS), and to support and facilitate its communication and implementation in the months and years to come.