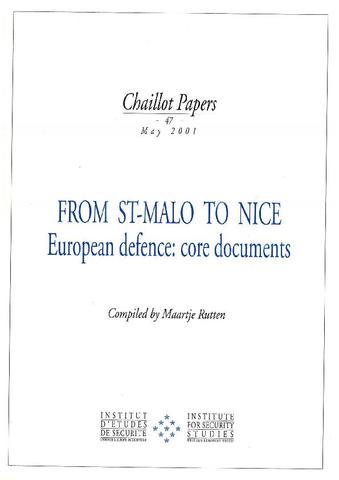 In the two years between St-Malo and Nice, the character of the European Union changed. What was previously unthinkable ‘at Fifteen’ became an objective agreed by all member states: the inclusion in the Union’s legitimate competencies of a common security and defence policy, in other words its acquisition of strategic responsibility in post-Cold War crisis management. Such a revolution was not a foregone conclusion: it required all the European traumatism of the decade in which Yugoslavia broke up to turn an old rhetorical ambition into a concrete policy. Nor could realising such an ambition be a matter of just a few months: while the Treaty of Nice effectively sanctions the build-up of the ESDP, much remains to be done - concerning both operational capabilities and coherent decision-making - to complete the Union’s credibility as an international actor. Nevertheless, the body of texts presented here by itself represents a historical milestone.