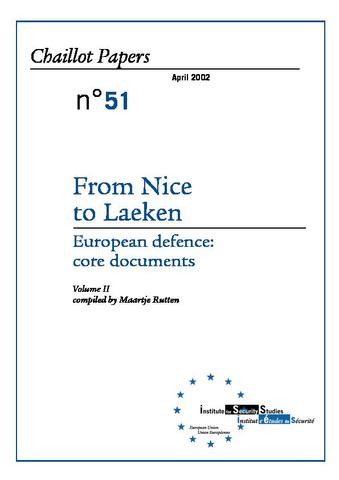 This is the second volume in our special series of Chaillot Papers presenting core documents on the EU’s security and defence policy. Unlike the first volume, which focused on the whole period from St-Malo to Nice (December 1998 - December 2000), this volume and subsequent ones will recapitulate developments regarding ESDP during the preceding year. 2001 reveals relatively less progress than the period up to Nice, although efforts needed to realise ESDP plans up to that date must not be underestimated. However, a lower frequency of meetings and initiatives was noti-ceable, especially as regards capabilities. In addition, 2001 was marked by the horrifying terrorist attacks in the US on 11 September, which impacted on the EU and ESDP, although the exact extent of this impact and possible required changes remain the subject of discussion.