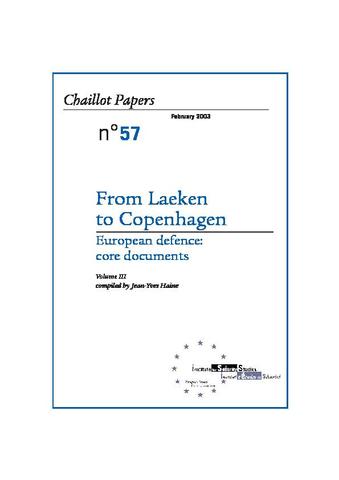 The year 2002 was characterised by relative stability in Afghanistan, the implacable impasse in the Israeli-Palestinian conflict and North Korea’s declared nuclear proliferation, but above all the prospect of a conflict in Iraq. There was thus an appreciable deterioration in the international environment. For the Union, 2002 will be remembered for the successful completion of two processes whose consequences for common security and defence are significant. First, the enlargement decided at Copenhagen considerably modifies the significance and scope of European security. Its new frontiers open up previously distant horizons, and at the same time the dividing line between internal and external security has become blurred. This new dimension is a major challenge: flexible solutions to the problems of decision-making and reconciling diversity will have to be found if the Union is to act effectively and legitimately. Next, the ‘Berlin-plus’ agreement gives the Union access to NATO’s planning and logistics facilities in operations where the Alliance is not engaged. This crucial accord opens the way for EU military operations in the Balkans. The Union, which has been conducting police missions in Bosnia since 1 January 2003 and will take over in Macedonia this spring, has announced its readiness to replace SFOR in Bosnia in 2004. These are the first, albeit limited operations to be conducted under ESDP. In parallel, the work of the Convention on the Future of Europe began last year. The final reports of the External Action working group, chaired by Jean-Luc Dehaene, and the Defence group, led by Michel Barnier, closed the first series of studies by the ‘Conventionists’. Important elements of the discussions on ESDP included a redefinition of the ‘Petersberg tasks’, inclusion of a clause on solidarity among member countries, the creation of an autonomous armaments agency and the prospect of enhanced cooperation. Discussion of these fundamental issues has attracted growing interest that will continue during 2003.