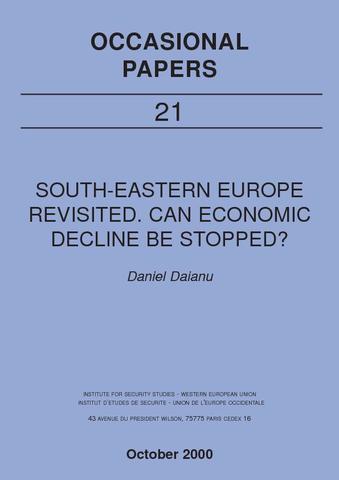 This paper attempts to evaluate the situation in South-Eastern Europe by focusing on two major sources of economic plight in the region and on the prospects for economic regeneration. One source of difficulties relates to the dissolution of former Yugoslavia. The wars in the region caused enormous pain and suffering that led to the deaths of a large number of people. There has also been enormous material destruction, the last war causing extensive damage to the civilian infrastructure of Kosovo and Serbia. In the aftermath of the last major conflict, the state of affairs in the Balkans remains unclear; major uncertainties about future dynamics persist, the political map of the region is still fuzzy, and reform policies continue to face major hindrances.
Another reason for economic failure is linked to the difficulties of transforming command economies. Economic dynamics in most post-communist countries have dashed the high hopes of the early 1990s. Post-communist transformation has proved to be a much more complex and complicated process of institutional change than expected. At the same time, the magnitude of the required resource reallocation (strain) and the friction caused by regime change (disorganisation) have made restructuring a very painful and protracted process; the scope of the latter can be linked to the legacy of communism and, here, one can point out the importance of history, geography and culture. Clearly, much of South-Eastern Europe was badly placed in this respect and bad path dependencies have been put in motion or reinforced during the last decade. Strain and disorganisation, as well as very weak institutions, explain much of the failure of reform during transition and, frequently, have rendered allegedly correct policy choices irrelevant. These factors have significantly reduced policy-makers’ room for manoeuvre.
The lessons of transition in general, and the dramatic events of the last decade in South-Eastern Europe, demand a policy that can restore confidence in the ability of elected officials (public authorities) to deal with the tremendous challenges at hand. But this ability has to be defined in a sensible way. For, on the one hand, the policies put in place until now have failed in important respects and this experience invites deep reflection, introspection and candid debate about errors as well as possibilities for the formulation of better economic policies. On the other hand, one has to approach the range and magnitude of the challenges facing South-Eastern Europe with humility, and acknowledge that miracles are not possible. Not only are the challenges ahead overwhelming but the development conundrum is far from being an easy one to solve. Moreover, the intertwining of economic and security issues can be disconcerting. What is realistic to achieve refers more to prerequisites and mobilisation of resources as ingredients for a peace and development (modernisation) process. There is thus a clear need for pragmatic and consistent public policy both at a national and a regional level.