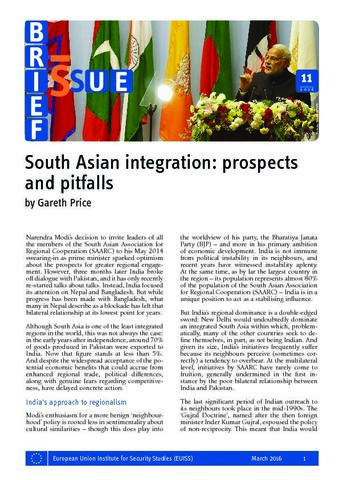 Narendra Modi’s decision to invite leaders of all the members of the South Asian Association for Regional Cooperation (SAARC) to his May 2014 swearing-in as prime minister sparked optimism about the prospects for greater regional engagement. However, three months later India broke off dialogue with Pakistan, and it has only recently re-started talks about talks. Instead, India focused its attention on Nepal and Bangladesh. But while progress has been made with Bangladesh, what many in Nepal describe as a blockade has left that bilateral relationship at its lowest point for years. Although South Asia is one of the least integrated regions in the world, this was not always the case: in the early years after independence, around 70% of goods produced in Pakistan were exported to India. Now that figure stands at less than 5%. And despite the widespread acceptance of the potential economic benefits that could accrue from enhanced regional trade, political differences, along with genuine fears regarding competitiveness, have delayed concrete action.