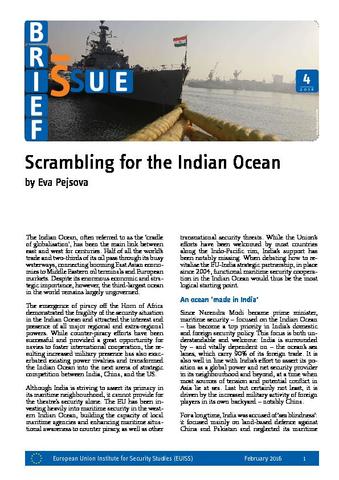 The Indian Ocean, often referred to as the ‘cradle of globalisation’, has been the main link between east and west for centuries. Half of all the world’s trade and two-thirds of its oil pass through its busy waterways, connecting booming East Asian economies to Middle Eastern oil terminals and European markets. Despite its enormous economic and strategic importance, however, the third-largest ocean in the world remains largely ungoverned. The emergence of piracy off the Horn of Africa demonstrated the fragility of the security situation in the Indian Ocean and attracted the interest and presence of all major regional and extra-regional powers. While counter-piracy efforts have been successful and provided a great opportunity for navies to foster international cooperation, the resulting increased military presence has also exacerbated existing power rivalries and transformed the Indian Ocean into the next arena of strategic competition between India, China, and the US.