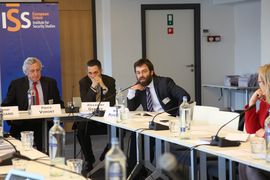 The roundtable discussion looked into the concept of a newly emerging partnership between Russia and China, as explored in the recent EUISS Chaillot Paper “China and Russia: an Eastern partnership in the making?” by Nicu Popescu and Michal Makocki.

Speakers identified certain areas of rapprochement between the two countries, but overall concluded that the differences outweigh them, and that there is no new actual new Eastern Partnership formed yet.