07 April 2016
By
With contributions from 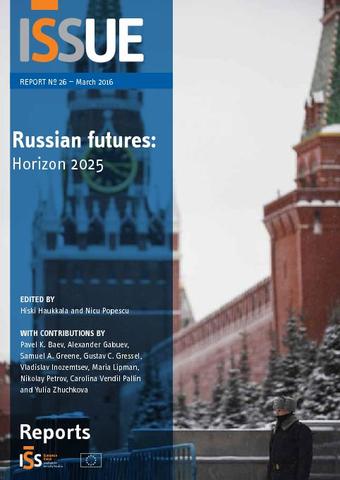 Predicting Russia’s future is a perilous exercise. Many, indeed perhaps most, of those who have ventured to make such predictions in the past have erred in one way or another. At the moment the danger of getting things wrong is perhaps particularly high since quite a number of short-term uncertainties with long-term consequences for the European continent – in both Russia and the EU – could make the next few years, let alone the next decade, radically different. From regional wars, refugees and their impact on the EU, to the falling oil price and Russia’s infatuation with military power as a quick fix to its foreign or domestic policy problems – the strategic environment is not simply unpredictable, but dangerously volatile. Yet it is precisely in such moments of uncertainty and crisis that planning for the future is more needed than ever. With this in mind, a group of prominent analysts and experts on Russia have sought to predict how Russia is likely to evolve over the next decade. The intellectual groundwork for this publication was thus laid in a series of meetings of an EUISS Task Force on Russia that took place in autumn 2015 and brought together experts and officials from the EU, Russia, the US and Ukraine. They decided to set about this exercise the hard way, choosing to go beyond the relative analytical safety of outlining the usual triptych of good, bad and middle-of-the-road scenarios. Scenarios are a good way to structure thinking and plan potential responses. But more often than not they allow experts to avoid placing bets and making judgements. In this publication experts are making considered judgements as to where Russia will stand a decade from now.