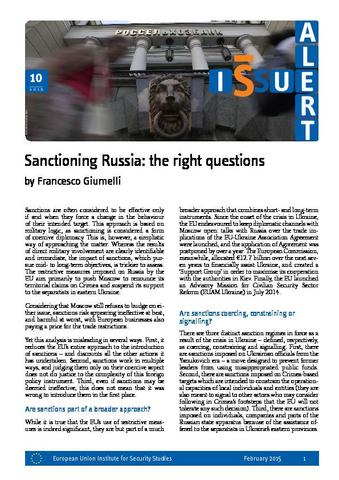 Sanctions are often considered to be effective only if and when they force a change in the behaviour of their intended target. This approach is based on military logic, as sanctioning is considered a form of coercive diplomacy. This is, however, a simplistic way of approaching the matter. Whereas the results of direct military involvement are clearly identifiable and immediate, the impact of sanctions, which pursue mid- to long-term objectives, is trickier to assess. The restrictive measures imposed on Russia by the EU aim primarily to push Moscow to renounce its territorial claims on Crimea and suspend its support to the separatists in eastern Ukraine.

Considering that Moscow still refuses to budge on either issue, sanctions risk appearing ineffective at best, and harmful at worst, with European businesses also paying a price for the trade restrictions. But is this true?

Do sanctions against Russia work?