Regional cooperation in the Western Balkans 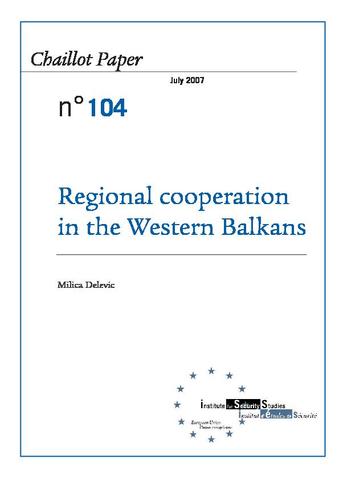 Regional cooperation in the Western Balkans is an issue that has been much discussed. Nor has there been any shortage of action to match the talk. As a result, the countries of the region are today much more closely connected through various cooperation schemes than they were seven years ago. This is a success that should not be underestimated. If the present situation is compared to the one prevailing in 2000 – an annus mirabilis for the region as democratic changes took place first in Croatia and later in Serbia – clearly a lot of positive developments have taken place. Today the Western Balkans is an emerging region in transition, where economic development is underway and in which cooperation is increasingly seen as an obvious choice, rather than a last-resort option. Yet not everything is rosy. There are still acute social problems within the Western Balkans – delayed integration and the violent conflicts that followed the disintegration of Yugoslavia mean that today the region is blighted by severe unemployment, poor infrastructure, drug and human trafficking and other forms of organised crime. To make matters worse, the EU integration process seems to have been plagued with controversy about ‘absorption capacity’, ‘integration capacity’ and ‘enlargement fatigue’, leading citizens of the countries in the region to question whether the prospect of membership promised to them is in fact a credible one. This Chaillot Paper tries to provide a background against which both cooperation among the countries of the region and their integration in the EU, as major vectors of long-term stabilisation, can be better understood but also more effectively encouraged. Focusing on the forms of cooperation that exist in the region, and also on the different expectations among external actors encouraging and regional actors participating in this, it highlights the importance of successful future cooperation and integration in a region that has traditionally known little of either.