Prospects for US-EU cooperation on security, freedom and justice 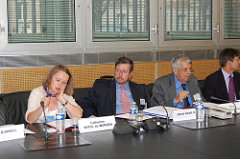 On 14 September 2009, the European Union Institute for Security Studies (EUISS) hosted a seminar on prospects for US-EU cooperation on security, freedom, and justice.  The event was part of a larger project organised by three US think-tanks (Center for Transatlantic Relations, Atlantic Council, and CSIS) on forging a strategic US-EU relationship.  The seminar’s purpose was to determine how the US and EU can work more effectively on security cooperation, which includes a vast agenda of issues beyond the framework of NATO, as well as how ‘societal resilience’ can be improved in order to tackle threat networks such as criminal and terrorist groups.

Most participants agreed that President Obama’s immense popularity in Europe, often twenty percentage points higher than polls in the US, created a highly propitious environment for enhanced US-EU cooperation.  Similarly, it was pointed out that the Spanish EU Presidency has made the issue of US-EU cooperation a high priority.  Based on recent Transatlantic Trends released by the German Marshall Fund, one participant observed that there was enormous convergence in values and views on human rights between the US and EU.  However, it was noted that this moment was not going to ‘last forever’ and that the time for action is now.