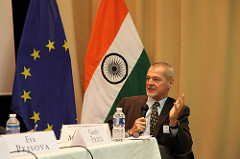 The Observer Research Foundation, the European Union Institute for Security Studies, and Chatham House held an event on the prospects for security cooperation at the Embassy of India to Belgium, Luxembourg and the EU on 4 November 2016. A report, the result of a closed-door workshop and a public conference held in New Delhi in September 2016, was presented and discussed at this conference. The event was opened with keynote addresses by H.E. Mr. Manjeev Singh Puri, Ambassador of India to Belgium, Luxembourg and the EU, and Gunnar Wiegand,

Managing Director Asia and Pacific, European External Action Service. A panel of experts from the participating organisations, chaired by EUISS Director Antonio Missiroli, then debated the proposals for India-EU collaboration on three areas of common concern outlined in the report: West Asia (the Middle East), Maritime Security, and Radicalisation and Terrorism.