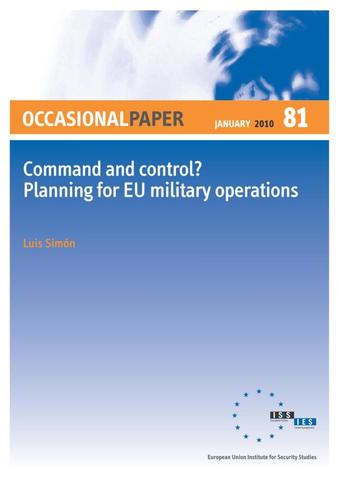 This paper assesses the effectiveness of the European Union’s capability for the planning and conduct of military operations. Given the fact that the planning and conduct phases of an operation can never be fully isolated from each other, the paper does include some references to the conduct dimension, i.e. command and control (C2). However, it is with planning issues that this paper is most directly concerned. It argues that the lack of a permanent planning and conduct capability cripples the Union’s planning and C2 performance as well as the development of the European Security and Defence Policy (ESDP) more broadly. This capability, though, need not adopt the form of a fully-fledged Operational Headquarters (OHQ). The paper explains that the nature and evolution of the Union’s planning and C2 capability is largely the result of compromises between France, Britain and Germany (the Union’s ‘Big Three’) and argues that a coincidence in British-German objectives – the ‘awkward alignment’ – is particularly responsible for the continuing absence of a permanent military planning and C2 capability.

In its policy recommendations, the paper attempts to reconcile the need to address the existing deficiencies in the realms of planning (no flexibility and lack of advance planning capacity) and C2 (the unreliability of the Union’s Communications and Information Systems infrastructure and the lack of situational awareness) with prevailing political caveats – principally, the general resistance to the creation of a fully-fledged and permanent military OHQ. It proposes strengthening the Military Assessment on Planning Branch (currently placed within the EU Military Staff) by setting up a planning skeleton (composed of some 50 officials) devoted to improving the Union’s advance planning performance and increasing flexibility in the Union’s planning process. This skeleton would be inserted within the future Crisis Management Planning Directorate (CMPD) structure. Additionally, an ad hoc group of national augmentees (drawn from a wider pool of some 80 to 100 pre-identified augmentees) could join a detachment from the skeleton and plug onto the existing OpsCentre or a national OHQ for operational planning and conduct purposes.

The paper is divided into three chapters. The first chapter explains ESDP’s planning cycle and describes the evolution of the Union’s planning and C2 capability. The second chapter proceeds to assess the planning and C2 performance of three military operations; EUFOR Althea in Bosnia and Herzegovina, EUFOR DRC in the Democratic Republic of Congo and EUFOR Tchad/RCA in Chad and the Central African Republic. The third and last chapter presents the study’s conclusions and offers practical policy recommendations aimed at improving the Union’s planning and conduct capability.