Participation and influence: Finland, Sweden and the post-Amsterdam development of the CFSP 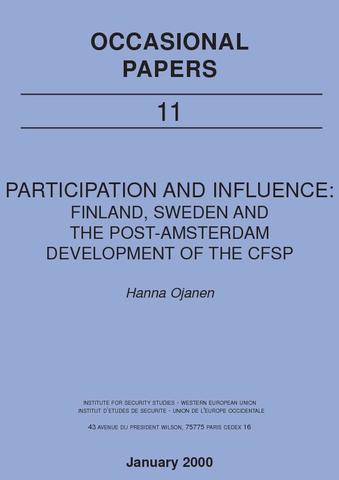 Militarily non-aligned Finland and Sweden are in many ways borderline countries in Europe. Historically, they are newcomers in the process of integration; geographically, they are located at the border of the Union; and borders play an important role also in their foreign and security policies – both because of their concern for the nature of the EU’s outer borders and because of their wish to draw a (border-)line between crisis management and defence.
Contrary to the understanding that non-alignment implies not taking part in joint undertakings, military non-alignment is in these two countries understood as a policy that does not impede them from participating actively in international security cooperation, including military cooperation. On the contrary, both countries have emphasised the importance of cooperation as a part of their security policy. Nevertheless, non-alignment may easily seem increasingly incompatible with the developing common security and defence policy. Both countries have had to react to accusations of not being fully committed to the goal of common security by trying to show that they are both willing and capable of contributing to further progress in this field – something that was particularly clear during the Finnish EU presidency.
The development of a common European security and defence policy constrains military non-alignment in particular through the autonomous crisis management capacity of the EU with its repercussions on, e.g., the question of a need for a mandate and of the means used in these operations. Collective defence (and before that, common goals or criteria for defence forces) is another central problem. The development of an EU crisis management capacity does not as such pose direct problems for Finland and Sweden. They would rather see it as something that they not only take part in, as they have traditionally done in the UN, but also as something that they have themselves been active in starting. They would point out that they played an active role in including the Petersberg tasks into the Amsterdam Treaty. It has also been repeatedly stated that the rights of the non-NATO members of the EU are recognised: they can participate fully and on an equal footing in&nbsp; EU-led crisis management operations.
The non-aligned draw a line between crisis management and defence. In their interpretation, when one speaks about defence in the EU context, one actually means crisis management. Yet, the notion of crisis management is evasive and tends to dilute non-alignment. In time, the non-aligned might have to accept both military operations without a UN mandate, peace enforcement tasks by military forces, the merger of WEU and EU and a strengthening of the role of the High Representative for the CFSP at the expense of that of the EU member states – in addition to practically increasing convergence of armed forces.
In all, the non-aligned seem more influenced than capable of influencing. They need to redefine their non-alignment to fit the changing conditions – perhaps particularly so for Finland, which is afraid of appearing as a ‘footnote country’ and eager to stick to the ‘core’ of the Union. As a result, non-alignment becomes confusingly articulated and, in the end, unconvincing; the two non-aligned seem not to have found, or wanted to find, ways to articulate it as a coherent position within the Union. Yet, what remains of non-alignment seems now to encompass not only the exclusion of defence commitments, with an emphasis on non-military crisis management and relations to the UN, but also a distinctive approach to the EU’s external relations both with non-member states and with other organisations.

Towards a common European policy on security and defence: an Austrian view of challenges for the "post-neutrals"