Towards a common European policy on security and defence: an Austrian view of challenges for the "post-neutrals" 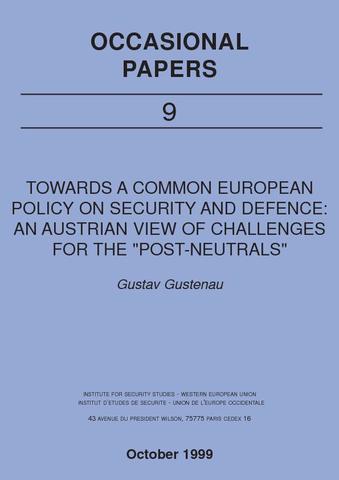 With the entry into force of the Amsterdam Treaty on 1 May 1999 and the European Council's Cologne Declaration of 4 June 1999, further steps have been taken towards the realisation of the Common Foreign and Security Policy (CFSP), and therefore towards a common defence policy. From the viewpoint of the EU member countries that are not members of NATO (i.e. Observers in WEU), who may now certainly be designated "post-neutrals", several urgent issues arise: the inclusion of assistance obligations in the Treaty on European Union (TEU), the arrangements for crisis-management in the framework of WEU (Petersberg tasks) and thus the transfer of essential WEU functions into the EU, decision-making and the range of military actions within the CFSP, as well as the related forthcoming challenges in the national political and military areas. In some "post-neutral" states, especially Austria, a discussion on the further development of the CFSP has been going on for some time, to the effect that there would be a requirement, in particular, to create a "European Security Union" largely independent of NATO and the United States. It therefore seems appropriate to first provide a rough outline of the development of the CFSP. The Maastricht Treaty of December 1991 included reference to a CFSP, including "the eventual framing of a common defence policy, which might in time lead to a common defence" (Art. J 4, para. 1), and a functional relationship between WEU and the EU was established. At the WEU ministerial meeting in Petersberg in 1992 an explicit distinction between Article V and non-Art. V contingencies was made, the latter (what were to become known as the "Petersberg tasks") decisively defining WEU's operational development.