Out of Syria: shifting routes and returns 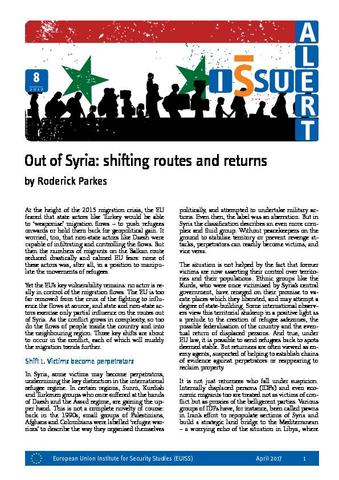 At the height of the 2015 migration crisis, the EU feared that state actors like Turkey would be able to ‘weaponise’ migration flows – to push refugees onwards or hold them back for geopolitical gain. It worried, too, that non-state actors like Daesh were capable of infiltrating and controlling the flows. But then the numbers of migrants on the Balkan route reduced drastically and calmed EU fears: none of these actors was, after all, in a position to manipulate the movements of refugees.

Yet the EU’s key vulnerability remains: no actor is really in control of the migration flows. The EU is too far removed from the crux of the fighting to influence the flows at source, and state and non-state actors exercise only partial influence on the routes out of Syria. As the conflict grows in complexity, so too do the flows of people inside the country and into the neighbouring region. Three key shifts are about to occur in the conflict, each of which will muddy the migration trends further.

Out of (and inside) Africa: migration routes and their impacts

The EU migration crisis – Getting the numbers right