For our eyes only? Shaping an intelligence community within the EU 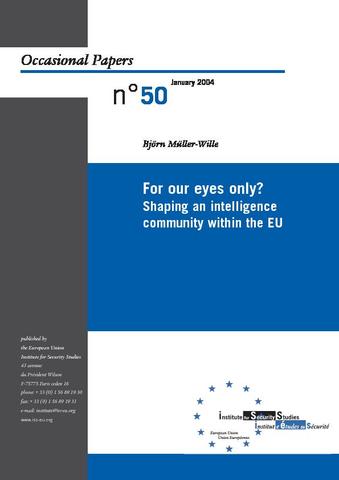 Developing international and cross-agency intelligence cooperation has become imperative in today’s security environment. If the so-called ‘new threats’ are to be tackled collectively, it is not only desirable but also necessary to make collective threat assessments. In contrast to other organisations, the EU applies and has to coordinate a broad range of security policy tools. Therefore, it also needs support from different kinds of intelligence agencies to a larger extent than other organisations. To this end, it has already begun to develop its own structure for the production and exchange of various types of intelligence. At present four EU ‘intelligence agencies’ can be identified: the fledgling Joint Situation Centre (SITCEN), the Intelligence Division of the European Military Staff (INTDIV), the European Union Satellite Centre (EUSC) and Europol. This paper argues that the EU does not need any new ‘agencies’. Instead it advocates some modification of existing EU ‘intelligence agencies’ in order to allow them to provide the intelligence support needed for various EU policies. Whereas the present organisation of the INTDIV and the EUSC are regarded as adequate, reforms are proposed for the SITCEN and Europol. The paper emphasises the necessity to strengthen and enlarge the SITCEN, which provides the Union and its member states with external intelligence. Furthermore, Europol should cooperate closer with the agencies of the second pillar (CFSP), and its responsibilities be extended. Apart from adapting existing agencies, the Union should concentrate on facilitating direct cooperation among national agencies in areas that fall under the responsibility of member states. To this end, a European Intelligence Communication Network should be established. One must not be put off by the large technical and political challenges involved in the designing and setting up of such a network, which is necessary because it would allow various European and national intelligence producers to communicate and improve their ability to assess threats. It is also a prerequisite for common assessments, since the Union has only limited intelligence capabilities, in particular collection capabilities, and depends on the support of national agencies. As a result, national and European decision-makers could obtain the support needed for the efficient and coherent national and collective production of security. If the technical standards and the methods, format and content of communications are developed in cooperation with third parties, most notably the United States, candidate countries and NATO, additional points of contact could be established and exchange and cooperation with them enhanced.