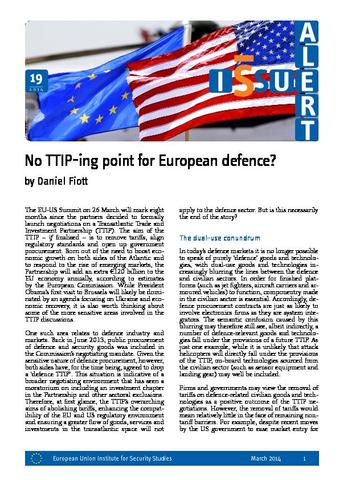 The EU-US Summit on 26 March will mark eight months since the partners decided to formally launch negotiations on a Transatlantic Trade and Investment Partnership (TTIP). The aim of the TTIP – if finalised – is to remove tariffs, align regulatory standards and open up government procurement. Born out of the need to boost economic growth on both sides of the Atlantic and to respond to the rise of emerging markets, the Partnership will add an extra €120 billion to the EU economy annually, according to estimates by the European Commission. While President Obama’s first visit to Brussels will likely be dominated by an agenda focusing on Ukraine and economic recovery, it is also worth thinking about some of the more sensitive areas involved in the TTIP discussions. One such area relates to defence industry and markets. Back in June 2013, public procurement of defence and security goods was included in the Commission’s negotiating mandate. Given the sensitive nature of defence procurement, however, both sides have, for the time being, agreed to drop a ‘defence TTIP’.

This situation is indicative of a broader negotiating environment that has seen a moratorium on including an investment chapter in the Partnership and other sectoral exclusions. Therefore, at first glance, the TTIP’s overarching aims of abolishing tariffs, enhancing the compatibility of the EU and US regulatory environment and ensuring a greater flow of goods, services and investments in the transatlantic space will not apply to the defence sector. But is this necessarily the end of the story?