Obama's change and America's relations with the world 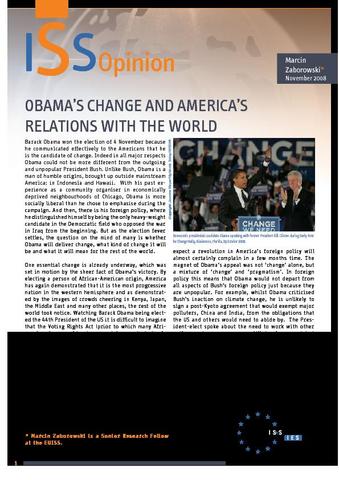 Barack Obama won the election of 4 November because he communicated effectively to the Americans that he is the candidate of change. Indeed in all major respects Obama could not be more different from the outgoing and unpopular President Bush. Unlike Bush, Obama is a man of humble origins, brought up outside mainstream America: in Indonesia and Hawaii.

With his past experience as a community organiser in economically deprived neighbourhoods of Chicago, Obama is more socially liberal than he chose to emphasise during the campaign. And then, there is his foreign policy, where he distinguished himself by being the only heavy-weight candidate in the Democratic field who opposed the war in Iraq from the beginning. But as the election fever settles, the question on the mind of many is whether Obama will deliver change, what kind of change it will be and what it will mean for the rest of the world.

One essential change is already underway, which was set in motion by the sheer fact of Obama’s victory. By electing a person of African-American origin, America has again demonstrated that it is the most progressive nation in the western hemisphere and as demonstrated by the images of crowds cheering in Kenya, Japan, the Middle East and many other places, the rest of the world took notice.

Watching Barack Obama being elected the 44th President of the US it is difficult to imagine that the Voting Rights Act (prior to which many African-Americans could not even vote) was adopted only 40 years ago. America has just demonstrated that its capacity to adapt and change remains astounding, and that it is a model for the rest of the world. After eight years of Bush, during which America saw a dramatic erosion of its ‘soft power’, the United States is again perceived as a beacon of hope.