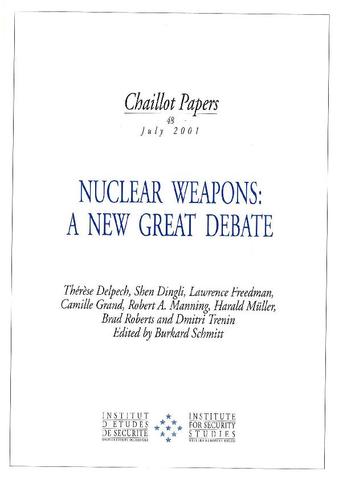 In nuclear matters more than in any other political area, perceptions have the force of law. The most concrete nuclear technology would count for little without the extremely sophisticated theories of uncertainty that form the basis of any nuclear deterrence strategy. Yet for the last few years both the technological and intellectual worlds of deterrence, as mankind has known it since 1945, have been in turmoil on all continents. It is above all the United States that is setting the tone. George W. Bush’s determination to develop anti-missile defences is merely the visible aspect of new American agitation over its strategic posture. Why, in recent years, has US perception of the global nuclear equation undergone such upheaval? Why is the Administration convinced of the urgent necessity for a complete overhaul of the international strategic system? Neither an analysis of the threat nor technological capabilities provide adequate answers to these questions. Certainly, nuclear and ballistic proliferation have been advancing steadily since the collapse of the Soviet system, and it would be foolhardy not to be concerned about this. None the less, given that proliferators present more of a threat to European territory than to the United States, and since China is officially left out of America’s rationale, the strategic reasoning behind anti-missile defence programmes is viewed with scepticism by many Europeans. Moreover, proliferation can appear to be as much the possible effect as the cause of NMD, which can therefore be seen as a cure that is worse than the ailment. The relationship between proliferation and defence is in fact awesomely complex: if implementation of American anti-missile defence programmes implies de facto a new nuclear arms race for some, ingenious new ways of penetrating those defences for others and greater strategic instability for all, will not the necessity for defences then become even more evident, indeed irrefutable? The current reality of technological breakthroughs is one of failure as far as all the tests carried out since the time of the Clinton administration are concerned. However, it is reasonable to suppose that the huge investment in anti-missile systems made by the Administration in American companies will have incalculable effects on all of the aerospace industry, in particular civil and military uses of space: in terms of their comparative advantage for America, notably vis-à-vis European industry, the benefits could in the future be decisive. It is therefore hard to see how what is good for America would also be good for its European allies, if only in terms of industrial competition, knowing that the sharing of technology is far from standard practice in American government culture. There is lastly the question of political motives. Curiously, this country that invented the most democratic social contract imaginable is today applying no less formidable energies to undoing the web of multilateral agreements and contracts that govern the functioning of international society – or at least freeing America itself from all the constraints of the system. Again in the area of strategic regulation, American repulsion concerns multilateral agreements (refusal to sign the CTBT, for example) as well as the legacy of US-Russian bilateral arms control (determination to leave the ABM Treaty).

Effective non-proliferation: The European Union and the 2005 NPT Review Conference