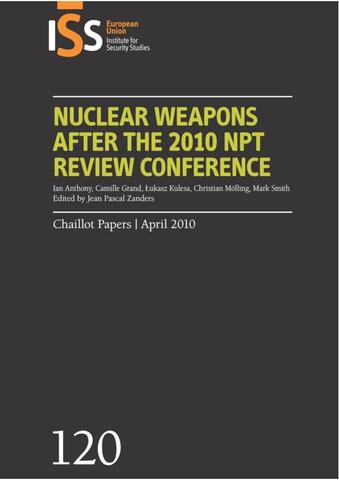 As of March 2010, 189 states are party to the Non-Proliferation Treaty, making it the most universal of all disarmament and arms control agreements. Just four countries remain on the outside: India, Israel, North Korea and Pakistan. However, each one of them is armed with nuclear weapons or widely believed to have stockpiled them.

The stakes in the 2010 Review Conference are considerable, because the previous meeting, held in 2005, ended without any substantive agreements and amid a lot of bitterness. But the cloud of pessimism about the treaty’s future lifted somewhat with the election of US President Barack Obama. During a visit to Prague, he contemplated a world free from nuclear weapons as he reintroduced the notions of multilateral disarmament and arms control to the international security debates.

Chaillot Paper No. 120 continues a tradition of reflecting on issues affecting the NPT in the run-up to a review conference. As the 2010 Review Conference takes place amid rising proliferation concerns and a fresh focus on the global elimination of nuclear weapons, it examines closely the interface between the obligations in Articles IV (non-proliferation) and VI (disarmament).

A new farewell to arms: viewing disarmament in a new security environment

Missile Defence in Europe: the political and security dimensions