Effective non-proliferation: The European Union and the 2005 NPT Review Conference 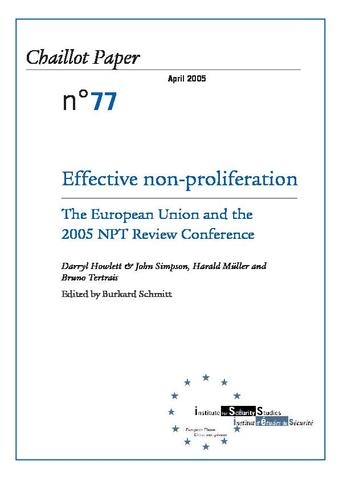 The European Union has identified the proliferation of weapons of mass destruction as a key threat to its security, and considers the Non-Proliferation Treaty (NPT) as a cornerstone of its strategy of fighting the spread of WMD. A successful outcome of the NPT Review Conference in May 2005 is thus of essential interest to the Union. However, the chances of achieving this objective are rather slim: the unresolved question of Iran, the unclear status of North Korea, a lack of enthusiasm on the part of the Nuclear Weapons States for further steps towards disarmament, limited progress in the conclusion and implementation of the IAEA’s Additional Protocol – to name only a few – are all obstacles to a successful conference. In this situation the EU, as the main protagonist of a multilateral, treaty-based approach to the fight against proliferation, has a particular responsibility to avoid the Review Conference becoming a failure. To achieve the EU’s objective, member states have to overcome their traditional divergences on nuclear issues and put forward innovative proposals. This Chaillot Paper demonstrates that there is enough common ground to do so: four distinguished experts assess the main challenges currently facing the NPT regime and develop ideas for the EU’s contribution to a successful conference. Member states should strive to protect the integrity and credibility of the NPT and continue to promote its universality. The EU should support and work towards the implementation of the Additional Protocol as the verification standard; it should also continue to work for the promotion of the early entry into force of the CTBT. Building on the effective national export control policies of its member states, the EU can also declare itself ready to assist third countries to strengthen their export controls. More broadly, regional security concerns must be addressed as well. In this context, CFSP in general can play an important role in supporting the NPT. Last but not least, member states should, within the EU, put aside tactics driven by external groupings and give priority to EU solidarity.