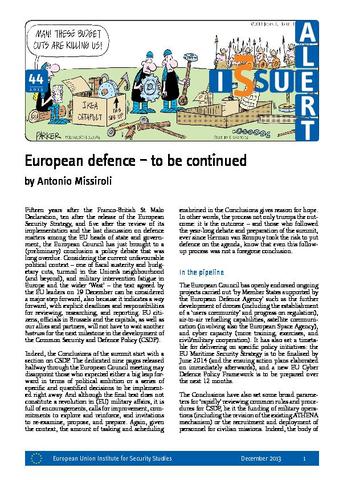 Fifteen years after the Franco-British St Malo Declaration, ten after the release of the European Security Strategy, and five after the review of its implementation and the last discussion on defence matters among the EU heads of state and government, the European Council has just brought to a (preliminary) conclusion a policy debate that was long overdue.  Considering the current unfavourable political context – one of fiscal austerity and budgetary cuts, turmoil in the Union’s neighbourhood (and beyond), and military intervention fatigue in Europe and the wider ‘West’ – the text agreed by the EU leaders on 19 December can be considered a major step forward, also because it indicates a way forward, with explicit deadlines and responsibilities for reviewing, researching, and reporting. EU citizens, officials in Brussels and the capitals as well as our allies and partners will not have to wait another lustrum for the next milestone in the development of the Common Security and Defence Policy (CSDP).