No Trump cards for Moscow 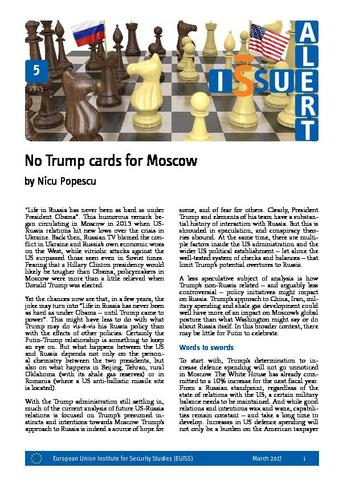 “Life in Russia has never been as hard as under President Obama”. This humorous remark began circulating in Moscow in 2015 when US-Russia relations hit new lows over the crisis in Ukraine. Back then, Russian TV blamed the conflict in Ukraine and Russia’s own economic woes on the West, while vitriolic attacks against the US surpassed those seen even in Soviet times. Fearing that a Clinton presidency would likely be tougher than Obama, policymakers in Moscow were more than a little relieved when Donald Trump was elected.

Yet the chances now are that, in a few years, the joke may turn into “Life in Russia has never been as hard as under Obama – until Trump came to power”. This might have less to do with what Trump may do vis-à-vis his Russia policy than with the effects of his other policies. Certainly the Putin-Trump relationship is something to keep an eye on. But what happens between the US and Russia depends not only on the personal chemistry between the two presidents, but also on what happens in Beijing, Tehran, rural Oklahoma (with its shale gas reserves) or in Romania (where a US anti-ballistic missile site is located).