Myanmar: would Europe get back in the picture please? 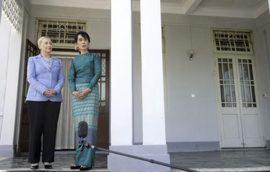 The recent events in Myanmar (Burma), beginning with the November 2010 elections and the following series of reforms, have taken Europe by surprise, and, to say it bluntly, they have been an embarrassing surprise. Myanmar’s first elections in 20 years have drawn the usual criticism from  Europe, fearing ’an attempt to consolidate authoritarian military rule in a civilian guise’. Could it have been otherwise?

The European Union has been caught in three traps at once, making it far from easy to change its current position concerning Myanmar – although it is urgent that it does so. The first trap concerns its unilateral interpretation of democratic transition and, more broadly, of democracy. Since the defence and promotion of European values are fundamental elements of the EU’s foreign policy (according to article 6 of the Treaty of the European Union), countries that do not follow the norms and procedures set up by the EU are, in essence, questionable. The second trap then, is that because of the way Myanmar proceeded, it became a direct challenge to European norms, values and supposed universality – this being at a time when globalisation introduces new rules of the game and newcomers upset the traditional hierarchy of power. Furthermore – and this is the third trap – the EU’s support to a confused network of NGOs, social and political activists or lobbies, made it difficult to lend a helping hand to the reformist elements within the new power configuration; one might even postulate that their influence obstructed a proper assessment of it.

Until recently, Thein Shein, the country’s current President who made the whole process possible, was still a loyalist of Than Shwe, the ruler Myanmar’s military junta, meaning that as a former officer he was unable to engage in democratic reforms. As a result, the EU extended its sanctions for another year in April 2011, sending the message that Brussels still considered Myanmar as a pariah State. Should we remember that Washington pragmatically decided to press ahead with a new policy from September 2009? Indeed, the European Union has locked itself into a dangerous position that has exasperated its Southeast Asian partners and mitigated the most open actors of Myanmar, at least temporarily.

Another difficulty for the EU, one that is not just limited to Myanmar, is the sensitive issue of building a common European position when Member States fail to agree on the situation and defend different policies. France, the United Kingdom, Germany and the Nordic States have all disagreed over Myanmar and have advocated different policies (London and the Hague have pushed for a hard stance while France, Germany or Sweden have proposed a softer approach).

It is no secret that the lifting of sanctions and restrictive measures still is a sensitive point of debate. To remain coherent – and because it would have predictably been met with criticism from activist groups – the EU stuck to its political prerequisites, putting its longstanding relationship with the Association of South East Asian Nations (ASEAN) at risk while the Association keenly defended its ‘engagement policy’. The diplomatic deadlock thus created by Europe with Myanmar and, more broadly, its weakened position with ASEAN, has maimed Europe’s leverage in the region’s dynamics. In the meantime, China has become the junta’s number one ally. But the idea of Chinese predominance in Myanmar distorted European analysis: if Brussels wanted to introduce change in the country, it should pressure Beijing. This reasoning proved wrong though, it is partly because of Myanmar wanting to distance itself from China that Thein Shein engaged in the crucial reforms.

Europe: what room for diplomatic manoeuvre?

The current pace of transformation in Myanmar has been startling: elections were held on November 2010; Aung San Suu Kyi, the leader of Myanmar’s democracy movement, was released the same month; a first round of political prisoners were freed in May; a general amnesty was extended to political prisoners in October and new labour laws allowed unions to formally organise themselves; the National League for Democracy (NLD), the main opposition movement, was allowed to register as a new political party in December and peaceful demonstrations have been allowed; partial elections will be held in April (Miss Suu Kyi has even agreed to consider a minister post if she is elected); ceasefire negotiations are under way with rebel groups while some ethnic rebels, like the Karens, have already signed agreements.

Some experts even fear this is all going too fast and too far, since civilian actors are not yet prepared to take full advantage of the new opportunities. Elites might well exploit them without much consideration for basic demands by rural communities (which make up 70 % of Myanmar’s 57 million inhabitants, half of them living below the poverty line). Political education is non-existent. The last 40 years have taught the Burmese to stay well away from politics.

Today, the priority is development, and in the general context of poverty, economic development trumps political development. Europe has a role to play, though, in supporting an ambitious aid policy rather than pushing for democratic norms – such rhetoric is incompatible with the reality of contemporary Myanmar. The transition process will certainly encounter setbacks and obstacles. These will be promptly denounced by political activists who have earned their legitimacy through work on the Myanmar case. These inevitable setbacks should not put paid to suspending European support. It is not the coming months that are going to be decisive, but the coming years.

The European Union has to show it can quickly adjust to an unpredictable scenario if it doesn’t want its credibility to remain deeply undermined in a region undergoing significant structural transformations. As Myanmar’s former Ambassador to the EU, Thuang Tun, puts it: ‘it is time for a paradigm shift to restore mutually beneficial relations and turn a new page’. ASEAN has to adjust to pressure from China, India and the ‘return’ of the United States; an invigorated relationship with the European Union would send a positive signal and a basis for a counterbalance.

It would be much appreciated in the region if Europe would support the Association on Myanmar’s presidency of ASEAN in 2014 and lift its sanctions. Europe and ASEAN should together find a way to consolidate both the socio-political transitions in Southeast Asia and the validity of European values.

The EU and Mindanao: innovative avenues for seeking peace