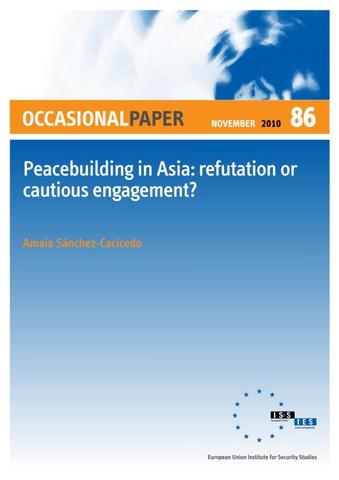 This Occasional Paper explores the features and implications of an ‘Asian’ approach to peacebuilding and seeks to define what is distinctive about this approach. In attempting to answer this question, the author aims to establish what characterises peacebuilding activities undertaken by Asian countries and how their attitudes to peacebuilding differ from Western-dominated mainstream views of peacebuilding. It is argued here that in an Asian context peacebuilding is conditioned by a Westphalian vision of the world as opposed to the post-Westphalian views of liberal interventionists. Thus, for Asian countries peacebuilding does not imply conflict resolution activities along the lines of peacemaking. Instead, peacebuilding practice in Asia is exercised through peacekeeping and economic assistance flows. Official involvement in a country’s internal political affairs, including humanitarian interventions that involve the use of force, or in domestic peace processes is commonly avoided. Yet, as in Western contexts, there is a growing niche for civil society in Asian peacebuilding activities as well as in the domain of non-traditional security issues. This development is explored in this paper. As a way of structuring the analysis, a distinction is made between peacebuilding within and beyond the Asian region, a key factor in influencing different actors’ approach. In the context of peacebuilding activities undertaken within Asia, the emphasis is on the nurturing of bilateral relationships and on ‘limited’ multilateral peacebuilding. The Association of Southeast Asian Nations (ASEAN) is examined as a case study in order to explore this last aspect further. When looking into Asian actors’ peacebuilding activities beyond the region, the cases of China, India and Japan are addressed. With the exception of Japan, the other countries under scrutiny in this paper have focused the bulk of their peacebuilding activities outside the region to contributing troops to UN Peacekeeping Operations (UNPKO), hence the emphasis on the latter. In the conclusion, the existence of common features that distinguish a cautious Asian engagement in mainstream peacebuilding activities is confirmed; however, caution is different from complete refutation. Indeed, the Westphalian nature of Asian actors’ approach to peacebuilding pervades both the regional and the global spheres, although the challenges are inevitably bigger at a global level. This further explains differences in motivation as well as in attitudes to the purpose of peacebuilding among Asian actors at different levels of analysis as addressed in this paper.