The EU and Mindanao: innovative avenues for seeking peace 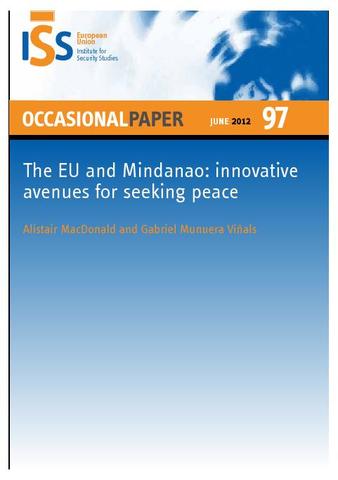 The confrontation between Muslim and Christian inhabitants of Western Mindanao, between the ‘Moros’ and the Philippine State, belongs to that category of ‘forgotten conflicts’ of which most international relations practitioners are often only vaguely aware. The conflict has historical roots that reach back centuries and has evolved with many twists and turns, culminating in an equally long and no less convoluted peace process. However, this conflict has important international ramifications and is one in which the international community is today actively involved, with facilitating and monitoring mechanisms involving states as well as non-state actors. In particular the European Union has been playing an increasingly important role, including in relation to diplomatic efforts aimed at finding a lasting solution, based on its holistic approach to crises and interaction with European NGOs. Given the complexities of the Mindanao Peace Process and its comparative remoteness, this Occasional Paper starts by providing a succinct overview of the conflict, focused on its main ‘turning points’: its historical origins; the latest cycle of violence starting in the late 1960s and early 1970s; the various peace agreements (1975, 1996); the divisions in the Moro camp (the Moro National Liberation Front versus the Moro Islamic Liberation Front); the creation of the Autonomous Region of Muslim Mindanao in 1989; the all-out wars of 2000 and 2003; the failed Memorandum of Agreement on Ancestral Domain and the latest serious crisis in August 2008; the return to the negotiating table in 2009 with a reinforced framework substantially and innovatively involving the international community; and the more hopeful prospects ushered in by the Aquino Presidency in 2010. The paper then focuses on the EU’s involvement in the conflict, moving gradually from the humanitarian and development arena towards a more explicitly political role in the peace process, in close cooperation with its Member States and with European NGOs. The EU’s holistic approach (focusing on development and humanitarian aid), which paved the way towards a more direct role for the EU in peace-seeking efforts, and the close interaction with specialised NGOs helping articulate the transition from a humanitarian to a political involvement, are elements that, in the view of the authors, present an interesting test-case for the EU’s conflict management capacities.

Transatlantic strategies in the Asia Pacific