Mutual defence – one month on 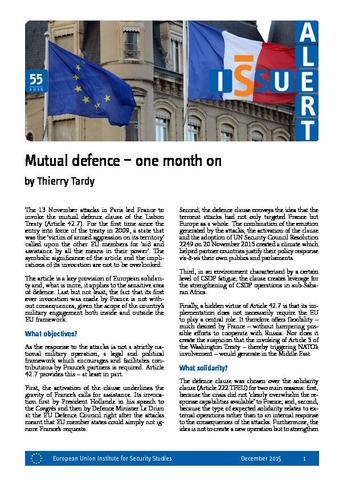 The 13 November attacks in Paris led France to invoke the mutual defence clause of the Lisbon Treaty (Article 42.7). For the first time since the entry into force of the treaty in 2009, a state that was the ‘victim of armed aggression on its territory’ called upon the other EU members for ‘aid and assistance by all the means in their power’. The symbolic significance of the article and the implications of its invocation are not to be overlooked.

The article is a key provision of European solidarity and, what is more, it applies to the sensitive area of defence. Last but not least, the fact that its first ever invocation was made by France is not without consequences, given the scope of the country’s military engagement both inside and outside the EU framework.