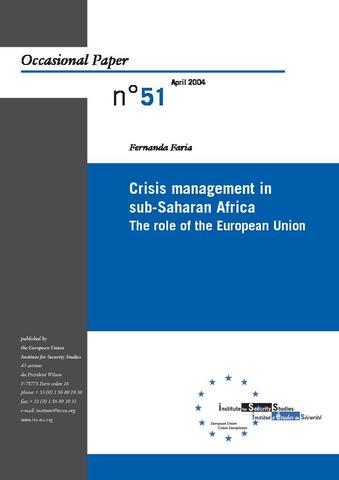 The increasing number and complexity of crisis situations in Africa and the declining interest of the international community in the region in the aftermath of the Cold War has led many African states and organisations to take a more proactive stance in their attempts to find solutions to their own problems. Significant efforts have been made by African regional and subregional organisations and their member states to develop mechanisms and adapt their structures in order to be able to respond to crisis situations in the region. However, structural, logistical, operational and financial weaknesses, besides political mistrust and ‘conservatism’, remain obstacles to the development of their capabilities to deal with conflicts in the region. Some Western countries, unwilling to intervene but aware of the problems in Africa, have created programmes to support and develop African capabilities to prevent, manage and resolve conflicts in the continent – France, the United Kingdom and the United States having important programmes in this respect. Although these vary considerably, they all focus in one way or another on providing training, equipment or financial assistance to African countries directly or through regional organisations. Other countries and international organisations have also included this dimension in their policies or activities towards some African countries/regions. At the multilateral level, bodies like the EU, the UN, the OSCE, the World Bank and others are increasingly focused on peace and stability in Africa. The role of the European Union is, in this regard, an interesting case of policy changes and shifting priorities. Relations between the EU and African countries were for a long time essentially economic and development oriented. This remains the fundamental dimension of EU-African relations, but the issue of conflict prevention has gained increasing importance in the overall EU policy towards Africa since the early/mid-1990s. The main focus of current EU policy is on addressing the root causes of instability and violent conflict. More recently the EU reinforced its commitment to support African organisations’ capabilities and efforts to deal with crises in the region, through the creation of a Peace Facility for Africa, while coordinating efforts with other international organisations (the UN in particular) and donors aimed at supporting peace-related efforts in Africa, at the institutional and operational levels. Furthermore, the EU has engaged militarily in preventing escalation and supporting conflict resolution efforts in the Democratic Republic of Congo (DRC). In the summer of 2003, EU (with non-EU) forces were deployed to Bunia (in the eastern district of Ituri, DRC) under an EU-led crisis management operation, Artemis, under a UN mandate and French command. Operation Artemis illustrated EU engagement in Africa and in crisis management in general, and provided an example of how EU key actors (institutions and member states) coordinated and cooperated to set up the operation. It was also a good illustration of the potential of combining the EU’s various tools to address conflict-related situations, from conflict prevention to post-conflict intervention, and of the complementarity between diplomatic, political, military, humanitarian, financial and development instruments. The EU intervention in DRC also raised concerns with regard to the overall EU priorities in crisis management, in this case regarding its policy towards Africa. Some perceive it as privileging military instruments for crisis management to the detriment of civilian crisis management and conflict prevention instruments and policies. However, the emphasis of EU crisis management instruments and policy is likely to remain on its civilian dimension for a number of reasons, including financial ones, although it is widely recognised that it is important to be able to resort to military instruments and capabilities when necessary.