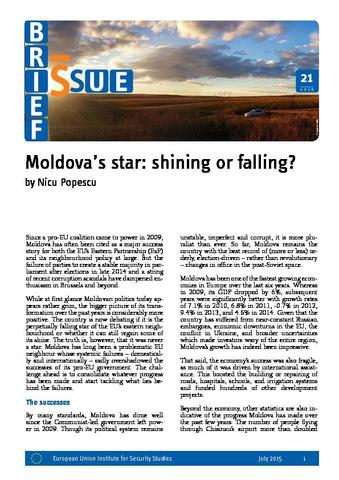 Since a pro-EU coalition came to power in 2009, Moldova has often been cited as a major success story for both the EU’s Eastern Partnership (EaP) and its neighbourhood policy at large. But the failure of parties to create a stable majority in parliament after elections in late 2014 and a string of recent corruption scandals have dampened enthusiasm in Brussels and beyond. While at first glance Moldovan politics today appears rather grim, the bigger picture of its transformation over the past years is considerably more positive. The country is now debating if it is the perpetually falling star of the EU’s eastern neighbourhood or whether it can still regain some of its shine. The truth is, however, that it was never a star. Moldova has long been a problematic EU neighbour whose systemic failures – domestically and internationally – sadly overshadowed the successes of its pro-EU government. The challenge ahead is to consolidate whatever progress has been made and start tackling what lies behind the failures.

Moldova: a narrow win for pro-Europeans