Moldova: a narrow win for pro-Europeans 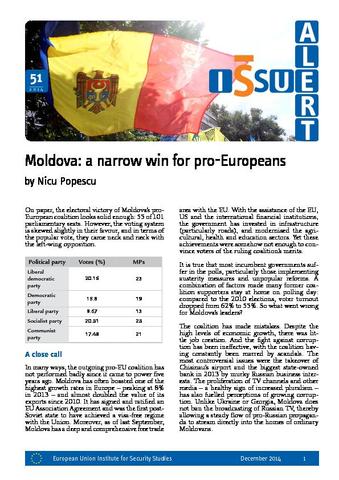 On paper, the electoral victory of Moldova’s pro-European coalition looks solid enough: 55 of 101 parliamentary seats. However, the voting system is skewed slightly in their favour, and in terms of the popular vote, they came neck and neck with the left-wing opposition. In many ways, the outgoing pro-EU coalition has not performed badly since it came to power five years ago. Moldova has often boasted one of the highest growth rates in Europe – peaking at 8% in 2013 – and almost doubled the value of its exports since 2010.

It has signed and ratified an EU Association Agreement and was the first post-Soviet state to have achieved a visa-free regime with the Union. Moreover, as of last September, Moldova has a deep and comprehensive free trade area with the EU. With the assistance of the EU, US and the international financial institutions, the government has invested in infrastructure (particularly roads), and modernised the agricultural, health and education sectors. Yet these achievements were somehow not enough to convince voters of the government’s merits.