Military intervention and the European Union 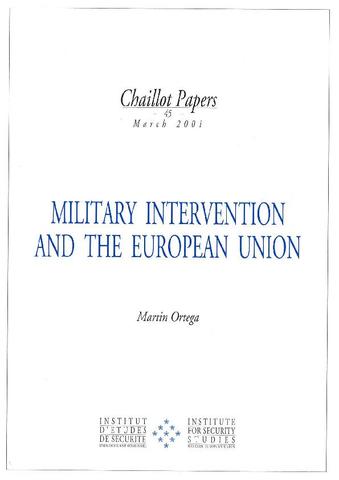 The Kosovo crisis marked a turning point in the development of the international system, not because the West was in any way improper in freeing itself from the constraints of realpolitik and UN legitimacy, but because it demonstrated the limits of those constraints. What Kosovo showed was surely not so much a violation of international law and the principle of non-intervention as the inadequacy of that law, which was drawn up half a century ago and marked by two historical, and therefore relative, notions of power and international order. That is just one of the fundamental issues analysed by Martin Ortega, lecturer in international law and research fellow at the Institute since 1997. This Chaillot Paper proposes a new set of conditions by which to determine the best possible link between the legality, legitimacy and political opportuneness of military intervention, since the principle of non-intervention in a state’s internal affairs no longer appears adequate, either as a basis of international law or as an assurance of stability in the post-Cold War world. National sovereignty of course remains the basic principle on which the international order is founded: respect for the territorial integrity of states and non-interference in their internal affairs are the foundation of international law as codified by the Charter of the United Nations, and one of the international community’s major criteria for choosing between action or non-intervention. But the principle of sovereignty has always been rich in perverse effects. Indeed, attempting to combine respect for states’ sovereignty, human rights and the principle of self-determination has always been one of the international order’s major deadlocks. However, since the end of the Cold War a new regulation has gradually been put in place that will in the long term make it possible to redefine the basis and legitimacy of military interventions, above all even in the absence of a United Nations mandate. One of the new basic assumptions of the international order that is in gestation is that sovereignty can never be a pretext for genocide, a principle that is perhaps the most stabilising for international security in the twenty-first century. Yet the originality of the analysis developed by Martin Ortega goes well beyond a legal-political discussion on the legitimacy on military intervention.

Is there an Albanian question?