Military cooperation: what structure for the future? 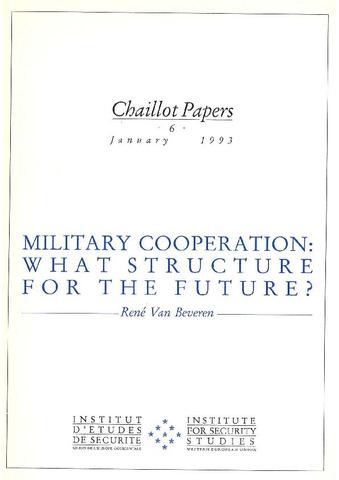 The end of the Cold War, the development of new political and military structures, the increased involvement of European forces in United Nations operations which may well involve a wider range of functions; all these developments make it necessary to re-examine the range of possible command arrangements for forces coming from various nations. This is what René Van Beveren does in this useful study which surveys the range of approaches to this problem which have been used in the twentieth century, with particular reference to the situation in the Atlantic Alliance and developing patterns of European cooperation. Colonel René Van Beveren joined the Institute as a Senior Research Fellow at its inception in 1990 on his retirement from the Belgian Army. The Institute hopes that his Chaillot Paper will make a useful contribution to this debate.