18 December 2012
By
With contributions from 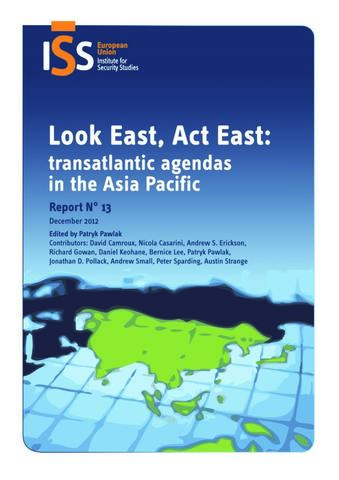 The EUISS is pleased to present the final report prepared in the framework of the research project ‘Look East, Act East: transatlantic strategies in the Asia Pacific’ carried out at the EU Institute for Security Studies since January 2012. The aim of this project was to explore the possibilities for developing a more strategic EU involvement in Asia – both inside and outside the transatlantic partnership. To this end, the EUISS organised a series of meetings with policy makers, diplomats and members of the research community from Europe, the United States and Asia. We also conducted a survey which resulted in the analysis entitled Transatlantic strategies in the Asia Pacific.  The report concludes that, on the whole, the transatlantic partners share similar objectives with regard to the Asia Pacific: nuclear non-proliferation and disarmament, free navigation and protection of the global commons, trade liberalisation and multilateralism. Nevertheless, history, geography as well as differences in perceptions contribute to forging two distinct stances vis-à-vis the region. Europe’s focus is on issues related to trade, financial regulation and global imbalances. The United States views the region through different lenses, giving precedence to security and trade issues. The challenge, therefore, is to identify areas where those two positions intersect and could potentially serve as a basis for an effective pursuit of common EU-US interests in the region.

Transatlantic strategies in the Asia Pacific