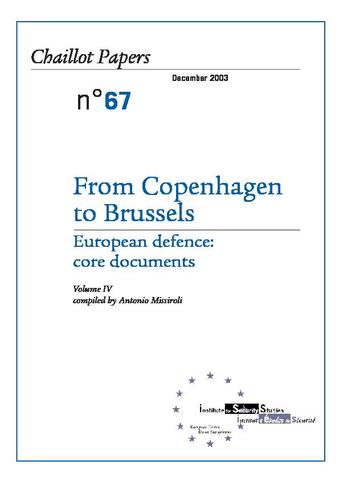 With this Chaillot Paper, the ‘European defence core documents’ collection reaches its fourth volume – stretching from Copenhagen, where the last European Council of 2002 was held, to Brussels, where the last one of 2003 took place. Yet the title ‘From Copenhagen to Brussels’ tells more than a purely bureaucratic story. If ‘Copenhagen’ can be used as a metaphor for enlargement, ‘Brussels’ can similarly be taken as a metaphor for concentration of resources and (hopefully) political will. Not that the latter was immediately apparent in 2003. On the contrary: the enlarging Union looked vertically split on how to deal with ‘regime change’ in Iraq; old and new cleavages – between current and acceding members, big and small ones, and also within each camp – came to the fore on both foreign policy and institutional reform; and even the Intergovernmental Conference (IGC) seemed to grind to a frustrating halt. Below and beyond such appearances, however, ‘European defence’ was moving forward at a surprising pace. This was true of the operational dimension, from EUPM to Concordia, from Artemis to Proxima. It was also true of the strategic dimension, from the paper on WMD proliferation to the Security Strategy proper. And, against all appearances, it was true even of the institutional dimension proper – from the deal on military headquarters, to the decision to set up an armaments a gency, and up to the latest version of the ESDP–relevant articles of the draft constitutional treaty. The present collection is not aimed at offering explanations for such an apparent paradox. Yet it can help track down its origins and provisional outcomes. Special attention has been devoted to highlighting the sequence of documents and decisions on specific policy issues, by giving cross–references and basic information on relevant external events. This applies to all three sub–chapters: the one on ESDP proper, the one devoted to the Iraq crisis, and the section on the European Convention and the IGC.