Islamic radicalism in the Balkans 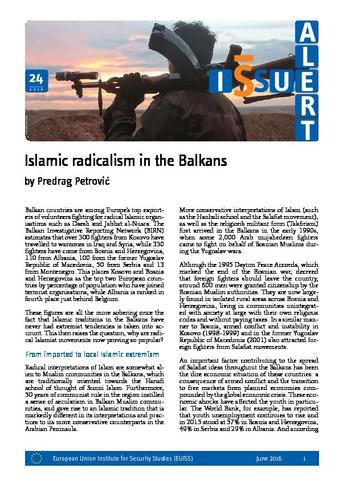 Balkan countries are among Europe’s top exporters of volunteers fighting for radical Islamic organisations such as Daesh and Jabhat al-Nusra. The Balkan Investigative Reporting Network (BIRN) estimates that over 300 fighters from Kosovo have travelled to warzones in Iraq and Syria, while 330 fighters have come from Bosnia and Herzegovina, 110 from Albania, 100 from Macedonia, 50 from Serbia and 13 from Montenegro. This places Kosovo and Bosnia and Herzegovina as the top two European countries by percentage of population who have joined terrorist organisations, while Albania is ranked in fourth place just behind Belgium. These figures are all the more sobering once the fact that Islamic traditions in the Balkans have never had extremist tendencies is taken into account. This then raises the question, why are radical Islamist movements now proving so popular?