The IPCR arrangements: a joined-up approach in crisis response? 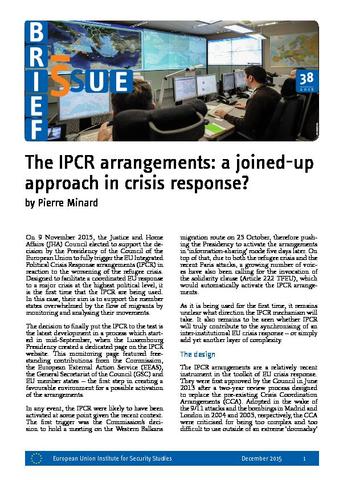 On 9 November 2015, the Justice and Home Affairs (JHA) Council elected to support the decision by the Presidency of the Council of the European Union to fully trigger the EU Integrated Political Crisis Response arrangements (IPCR) in reaction to the worsening of the refugee crisis. Designed to facilitate a coordinated EU response to a major crisis at the highest political level, it is the first time that the IPCR are being used. In this case, their aim is to support the member states overwhelmed by the flow of migrants by monitoring and analysing their movements.
The decision to finally put the IPCR to the test is the latest development in a process which started in mid-September, when the Luxembourg Presidency created a dedicated page on the IPCR website. This monitoring page featured free-standing contributions from the Commission, the European External Action Service (EEAS), the General Secretariat of the Council (GSC) and EU member states – the first step in creating a favourable environment for a possible activation of the arrangements.