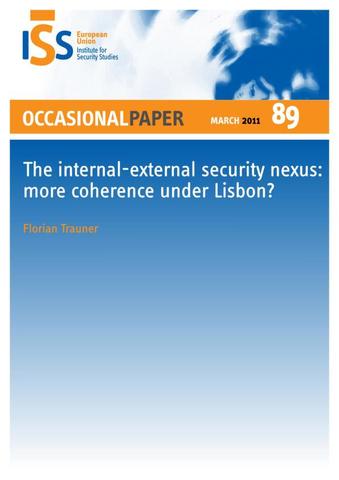 Since the entry into force of the Treaty of Amsterdam, the EU has intensified its efforts to establish closer coordination between the internal and external dimensions of the EU’s security policies, i.e. between the fields of justice and home affairs (JHA) and foreign and security policy, based on the assumption that this serves the interests of all actors involved. More inward-looking actors, typically from the ministries of the interior and justice in individual Member States, believe that they can strengthen their internal problem-solving capacities if the EU uses its foreign policy instruments and capabilities in a targeted and focused way to improve internal security and to engage third countries in achieving its goals in the JHA domain. At the same time, JHA expertise and actors have become an indispensable resource for traditional foreign policy actors in terms of dealing with today’s security challenges and achieving the EU’s main foreign policy objectives, such as promoting the rule of law and preventing state failure. This Occasional Paper seeks to analyse the issue of coherence and complementarity between EU internal security policies and external relations/foreign policy, focusing on the impact of the Treaty of Lisbon on existing political and institutional challenges. A key political challenge has been that the mainstreaming of internal security objectives in EU external relations, frequently driven by a security rationale that relegated human rights and civil liberties-related issues to secondary status, has risked undermining the stated normative principles of EU foreign policy-making. At an institutional level, the EU has had difficulties in living up to the expectations of its ambitious strategic papers, not least due to the tendencies of each Council formation (Justice and Home Affairs, Foreign Affairs Council) to protect its own turf. The paper argues that the EU can address the institutional and political challenges by strengthening existing coordination mechanisms and fully exploiting the possibilities which the Lisbon Treaty offers. The European Parliament, now a legislative actor equal in standing with the Council in the Area of Freedom, Security and Justice (AFSJ), should become more engaged in the process of negotiating international agreements in the JHA field and the Council should no longer put its priorities on the back burner in relation to issues such as readmission of third-country nationals and data protection involving high stakes in the sphere of human rights and civil liberties. The problem of insufficient institutional cooperation between the Justice and Home Affairs and Foreign Affairs Councils can be tackled by, firstly, establishing a strong JHA expertise in the European External Action Service and, secondly, involving the JHA Council structures in a more comprehensive and systematic way in the planning and conduct of CSDP civilian crisis management missions and in CFSP thematic and geographical working groups. The paper concludes by underlining that the EU’s success in moving towards comprehensive coherence will also be determined by the political will and ability of internal and foreign policy actors to overcome their habit of thinking in different security mindsets and to develop a shared understanding of European security challenges.