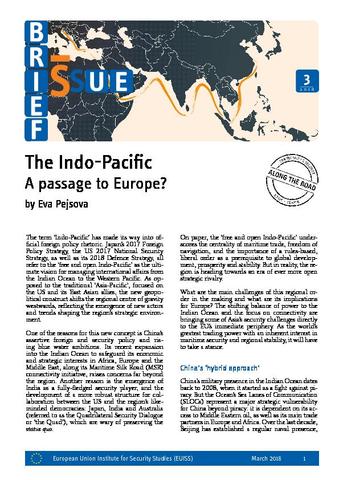 The new 'Indo-Pacific' is headed for an era of more open strategic rivalry. At the forefront, China’s progressive expansion into the Indian Ocean to secure its interests along its Maritime Silk Road connectivity initiative is raising concerns about its assertive foreign and security policy. On the other side, a more robust collaboration is emerging between the status quo powers (US, Japan, India and Australia - the Quadrilateral Security Dialogue), which are wary of preserving a rules-based liberal democratic order. The focus on connectivity and maritime security puts Europe on the spot: as the greatest trading power with an interest in regional stability, Brussels will have to take a stance.

This Brief sets the stage for an upcoming EUISS series entitled ‘Along the road’, which will examine the security implications of China’s Belt and Road Initiative (BRI). Through a collection of case studies from infrastructure projects and countries situated 'along the road', this series will seek to gather concrete evidence of the success or failure of Beijing’s new geopolitical project.