Hybrid: what’s in a name? 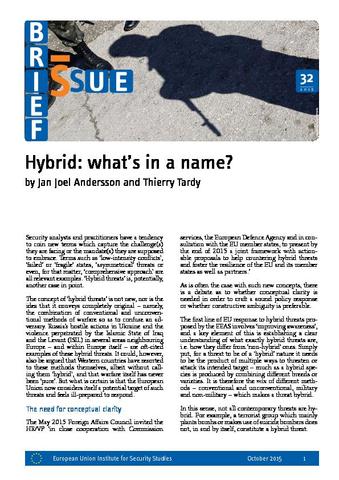 Security analysts and practitioners have a tendency to coin new terms which capture the challenge(s) they are facing or the mandate(s) they are supposed to embrace. Terms such as ‘low-intensity conflicts’, ‘failed’ or ‘fragile’ states, ‘asymmetrical’ threats or even, for that matter, ‘comprehensive approach’ are all relevant examples. ‘Hybrid threats’ is, potentially, another case in point. The concept of ‘hybrid threats’ is not new, nor is the idea that it conveys completely original – namely, the combination of conventional and unconventional methods of warfare so as to confuse an adversary. Russia’s hostile actions in Ukraine and the violence perpetrated by the Islamic State of Iraq and the Levant (ISIL) in several areas neighbouring Europe – and within Europe itself – are oft-cited examples of these hybrid threats. It could, however, also be argued that Western countries have resorted to these methods themselves, albeit without calling them ‘hybrid’, and that warfare itself has never been ‘pure’. But what is certain is that the European Union now considers itself a potential target of such threats and feels ill-prepared to respond.