Handle with care: crowd-sourcing and non-proliferation 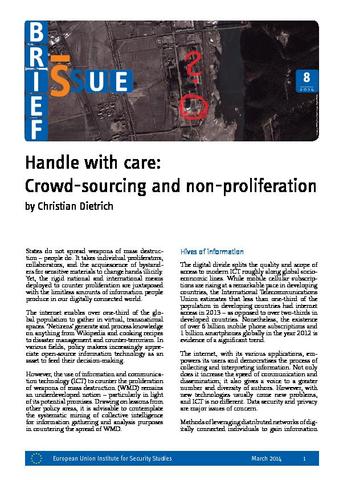 States do not spread weapons of mass destruction – people do. It takes individual proliferators, collaborators, and the acquiescence of bystanders for sensitive materials to change hands illicitly. Yet, the rigid national and international means deployed to counter proliferation are juxtaposed with the limitless amounts of information people produce in our digitally connected world.
The internet enables over one-third of the global population to gather in virtual, transnational spaces. ‘Netizens’ generate and process knowledge on anything from Wikipedia and cooking recipes to disaster management and counter-terrorism. In various fields, policy makers increasingly appreciate open-source information technology as an asset to feed their decision-making.
However, the use of information and communication technology (ICT) to counter the proliferation of weapons of mass destruction (WMD) remains an underdeveloped notion – particularly in light of its potential promises. Drawing on lessons from other policy areas, it is advisable to contemplate the systematic mining of collective intelligence for information gathering and analysis purposes in countering the spread of WMD.